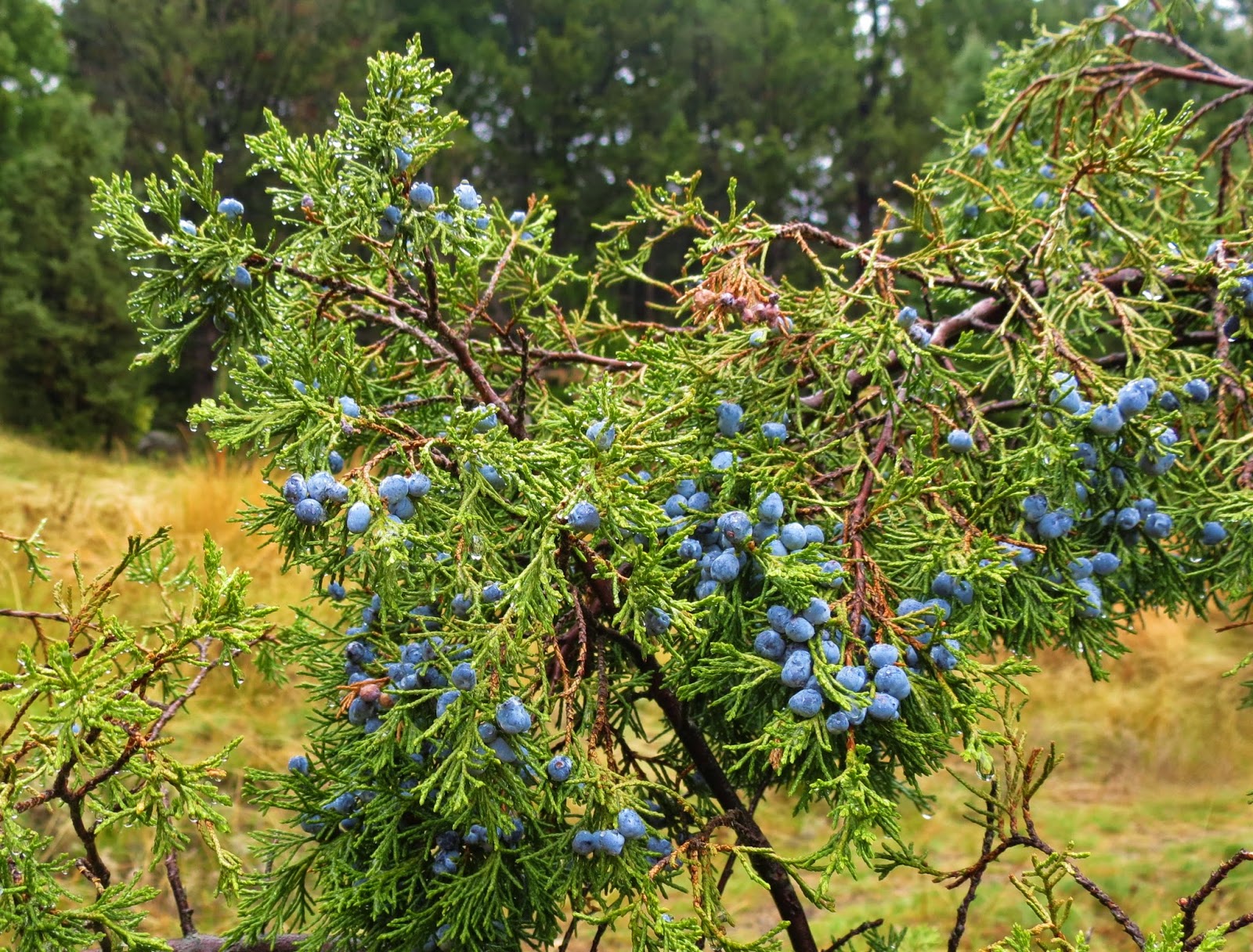 Quick IDRocky Mountain juniper is a small conical tree that grows to be around 30' high.  The bark is raggedy and shredding, reddish-brown to gray.  Its leaves are actually made up of thousands of tiny little needles, about 2 mm long.  If you look close, you'll see that some of these needles stick out all over the stem like a Doug Fir.  These are the juvenile leaves.  Mature leaves are squashed up flat against each other (known in the botany world as appressed), layered like shingles on a roof.
There are three other species of juniper native to Montana.  Common juniper (J. communis) is a small shrub that's easy to recognize.  Its needles aren't apressed; they go poking out all around the stem in whorls of three, and have distinctly white undersides.Creeping juniper (J. horizontalis) has leaves much like the Rocky Mountain juniper, but it grows in dense mats, never more than 2' tall.  The leaves are usually a dark green, whereas J. scopulorum tends to be more blueish-gray.  And finally, the Utah juniper (J. osteosperma) is another 30' tree.  Everything about it somehow seems more blunt: broader needles, a squarish crown, and a generally more squat appearance.  In Montana, you'll only find it in Big Horn and Carbon counties, south of the Pryor mountains, where it's at the northern edge of its range.
You might confuse juniper with the western red cedar (Thuja plicata) in northwest Montana.  The leaves are similar, but the branches are more flattened, spray-like and brighter green.  The cones are also woody, whereas juniper bears seeds in what look like blue berries (they're technically female cones).  Juniper "berries" form in May or June and take two years to mature; you'll find green immature berries all over the branches along with the blue ones, which are usually covered with a white bloom.  If you're looking to harvest the berries, remember that, unlike most trees, junipers are dioecious (from the latin for "two houses"), meaning that individual plants are either male or female.
Only the female plants have berries; the male ("staminate") cones just look like little brown nubs at the tips of branches, which scatter pollen to the wind.  Female trees also tend to have shreddier bark, as opposed to the patchier bark on males.
What's in a Name?
The species name of Rocky Mountain juniper, scopulorum, comes from the Latin 'scopul'  meaning rocky crags or cliffs, which is just where you'll find these bristly trees on your botanical field excursions.The origin of the common name juniper (and genus Juniperus) is shaky.  I've been combing through a lot of suggestions this morning, some silly and some sensible, and I'm not sure who to believe.  I do love the salty old etymologist Bill Casselman's take on the topic as a whole, and found this article pretty enlightening.Juniper is also becoming a popular baby name.  Ultimately, the given name is probably not derived so much from the plant as from the Welsh name Guinevere (which also gave rise to the name Jennifer).
Range 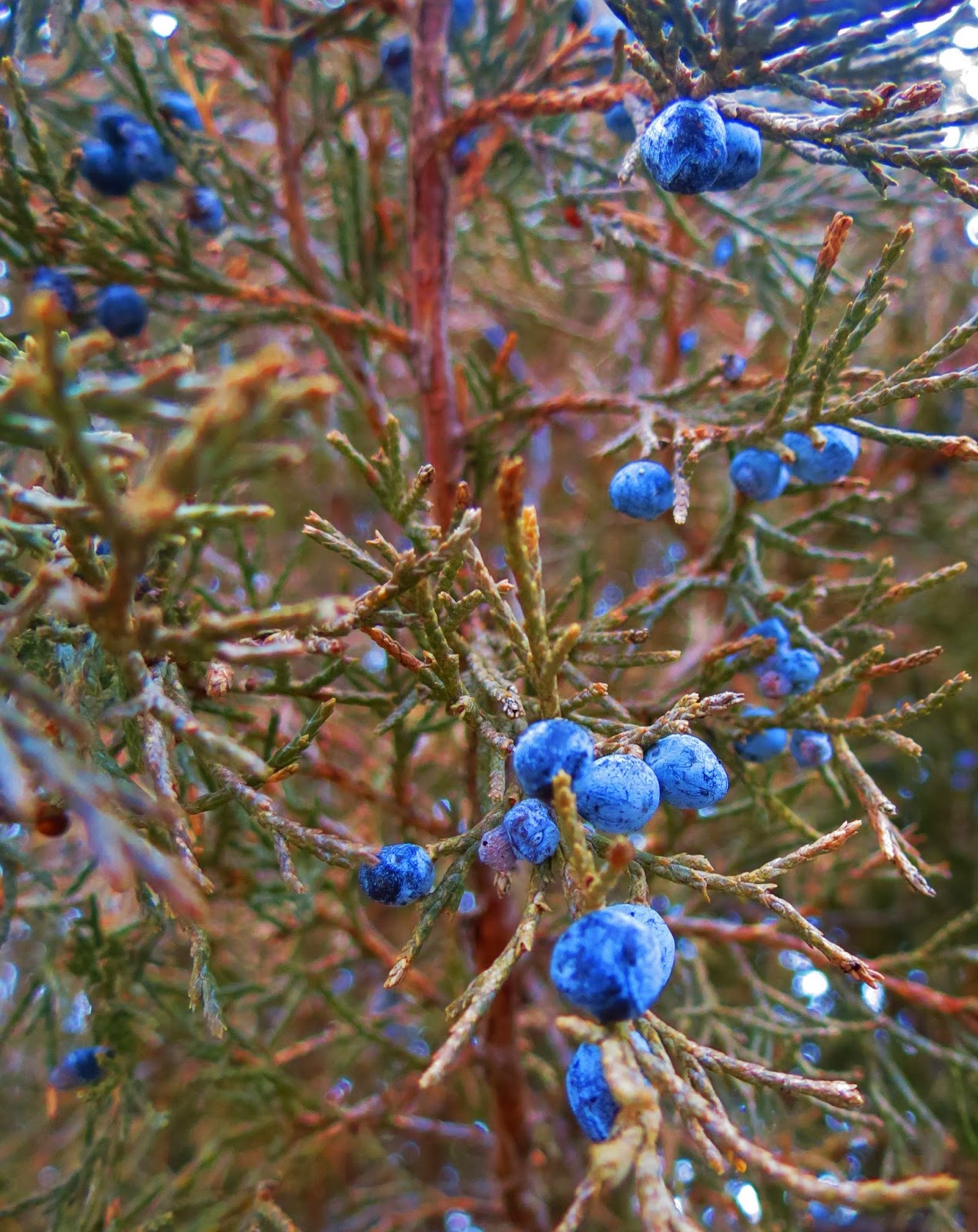 Look for Rocky Mountain Juniper in dry, rocky foothills and montane regions from BC and Alberta south to New Mexico and east to the Dakotas.  The range is extended somewhat due to the fact J. scopulorum hybridizes regularly with other juniper species and horticulturally cultivated varieties.
Tidbits
Junipers, along with other members of the cypress family, have been around for a looooong long time.  Ever since the earth's land masses were clumped together in the super-continent  Pangaea, 250 million years ago.  This is why you can find the very same species, Juniperus communis, as a native shrub in North America, Asia and Europe.  This ancient plant, as you might expect, has a rich and fascinating history.Juniper's light, durable wood is naturally streaked with a lovely red and white grain, and makes fine tools and decorative utensils.  The shredded bark has been used in rope-making and padding for diapers.  The dried berries can be dried and strung into necklaces; Navajo mothers are said to have given these "ghost beads" to their babies to prevent bad dreams. 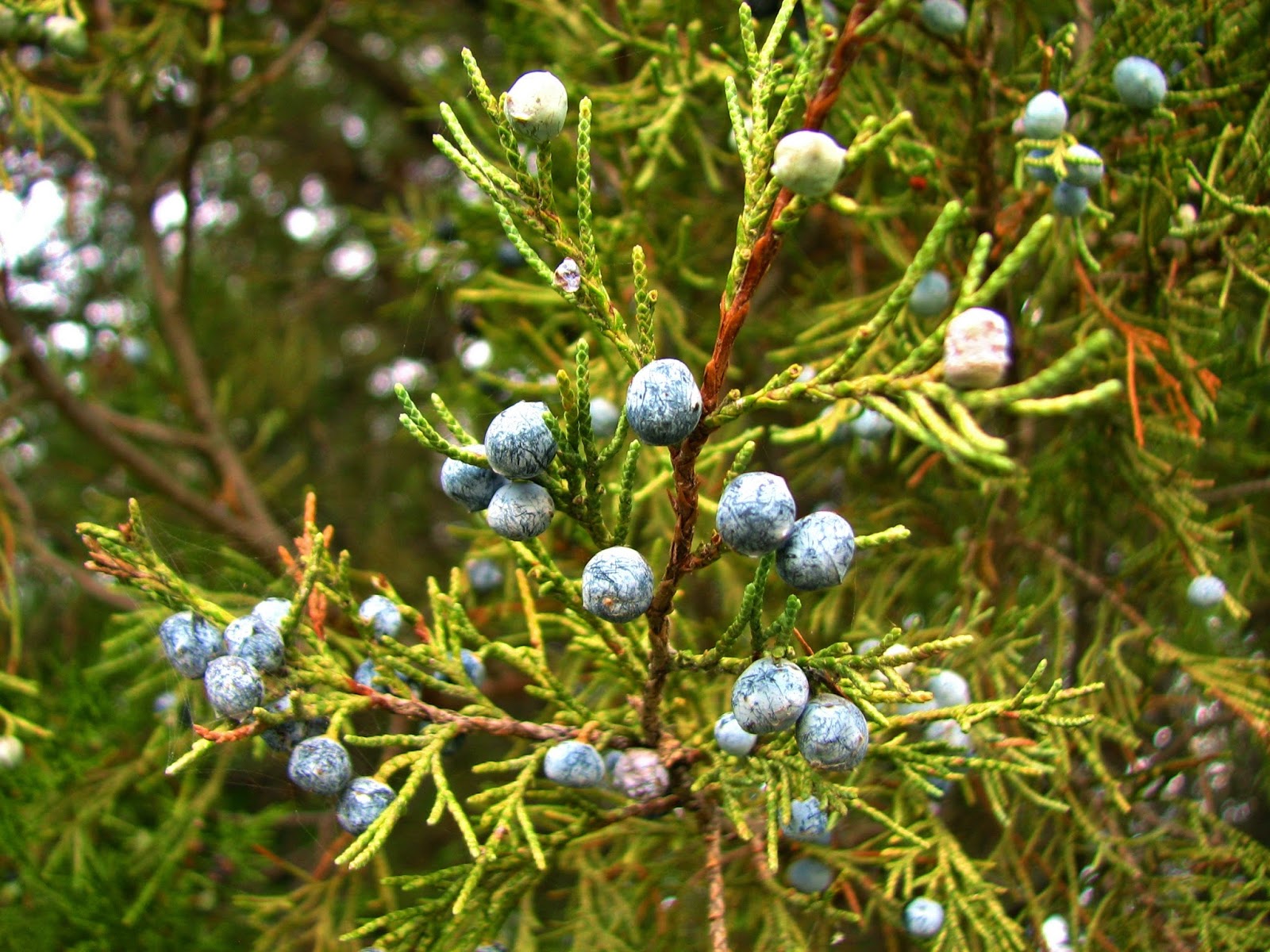 The berries and aromatic branches of the juniper have also been used medicinally since ancient times (the Greek physician Galen mentions it as early as the second century AD), for a list of ailments too long to go into here.  The essential oil does contain the diuretic compound terpinen-4-ol, as well as Amentoflavone, which has antiviral properties.  Juniper berry tea has a long, complicated, sometimes dangerous association with child-bearing.  It was used by Shoshone women as a contraceptive, and Zuni and Apache women drank the tea to promote muscle relaxation during labor.  Juniper oil does increase uterine contractions, and many native tribes (and pioneer women) used it to induce abortions, sometimes with fatal results.The berries are not particularly edible on their own, but they do lend their distinct flavor to that most delightful spirit, gin.  The earliest juniper-flavored alcohols were medicinal concoctions,  and would have borne little resemblance to our modern take on gin.  The species most often used in gin production today is the long lived Juniperus communis communis.
For the most part the berries (a thousand tons a year or more!) are still wild-harvested, coming principally from Tuscany, Morocco and eastern Europe.  Hand picking is long, laborious work because remember, there are berries in all stages of ripeness on each branch.  To only pick off the dark blue berries and leave the green fruit alone requires a lot of elbow grease and some skill with a good whacking stick. Once harvested, the berries are infused into a neutral base spirit (vodka) and violá!  Oh Captain, my Captain.  Distillers can be a little secretive about their recipes, but common additions often include angelica, orris root (a type of iris that acts as a fixative for other flavors), cardamom, bay leaf, citrus, ginger, grains of paradise (in the ginger family Zingiberaceae), lavender, coriander, fennel and cubeb (similar to black pepper).
We could go on and on about the history of gin.  It's production as "medicine" during prohibition.  England's 18th century Gin Craze.  The fascinating story of quinine.  Jenever, Old Tom and London Dry.  Bathtub gin.  So on and so forth.  If you'd like to read more, and in fact discover a whole incredible world of botanicals as they relate to alcohol, please do pick up a copy of Amy Stewart's The Drunken Botanist.  You'll be glad you did. 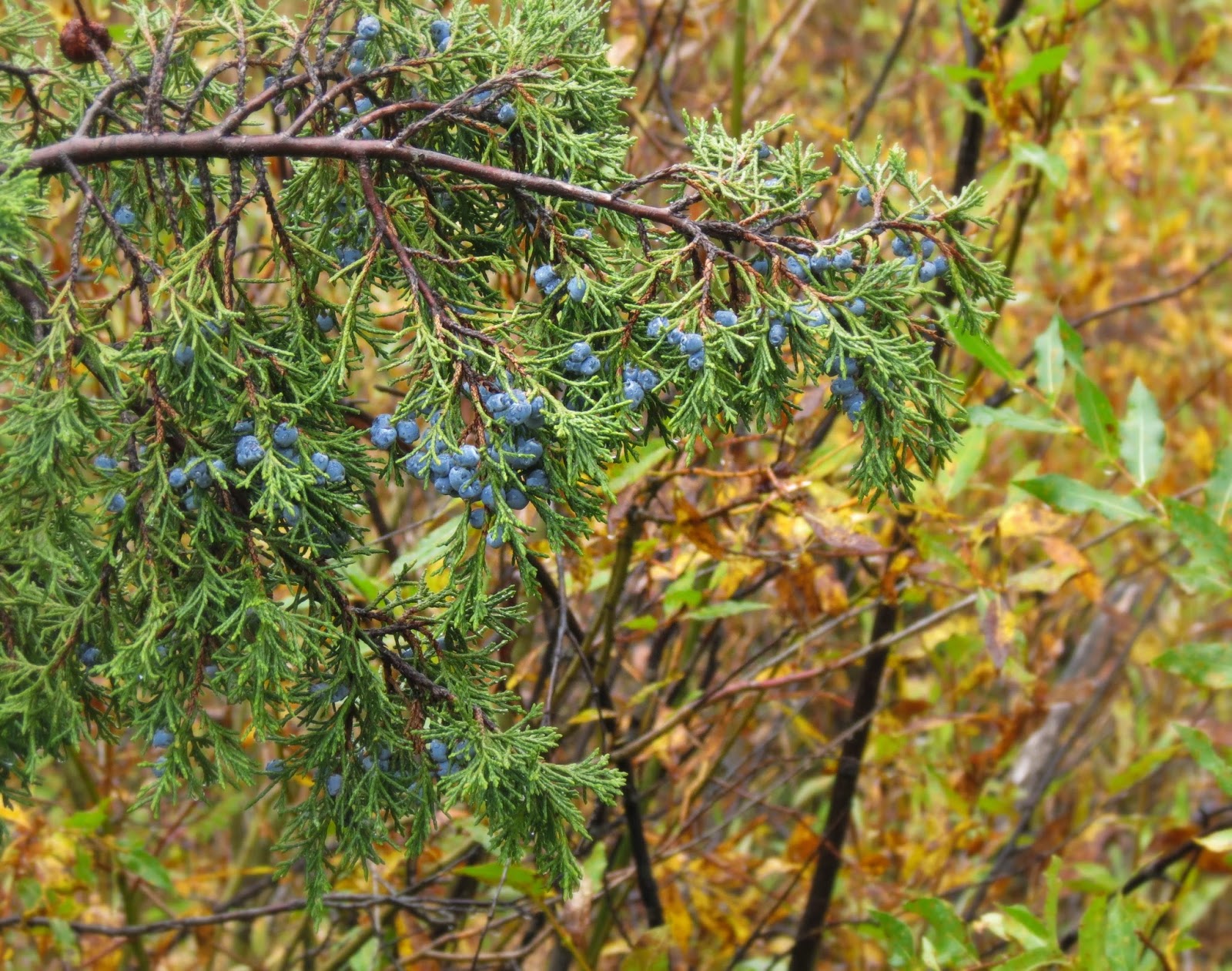 
The Rocky Mountain juniper is one of our toughest little trees, and is a perfect choice for natural gardens.  The tiers of branches, loosely woven, call the eye upward and beyond the borders, providing structure and texture in every season. Waxy-coated leaves make it incredibly drought resistant and winter hardy.  Junipers want full sun or part shade, and very little water.  If you are going to irrigate, mke sure the soil is really well drained.  Although very slow-growing, give it enough space to accommodate its mature size (about 20-30' high with an eight foot spread).
Try propagating juniper by taking heel cuttings after a couple of hard freezes, and using a rooting hormone.  If you want to try growing it from seed, sow them in the fall and cross your fingers.  It's possible, but expect your germination to be pretty low.  Plants are also readily available at nurseries, but ask questions to be certain you're getting the true native species.  There are a ton of Juniperus cultivars and ornamental varieties.  There might be nothing wrong with that per se, but as a general practice, the more your garden plants resemble the native species found in your area, the better they'll be at providing food, shelter and nesting sites for your local insects and other wildlife.

Juniper berries are relished in fall and winter by many small birds, especially waxwings and grosbeaks.  Junipers are larval host plants for the Juniper Hairstreak butterfly (Callophrys gryneus).  Watch for males perching amidst the branches on your next summer excursion. 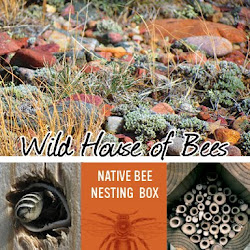